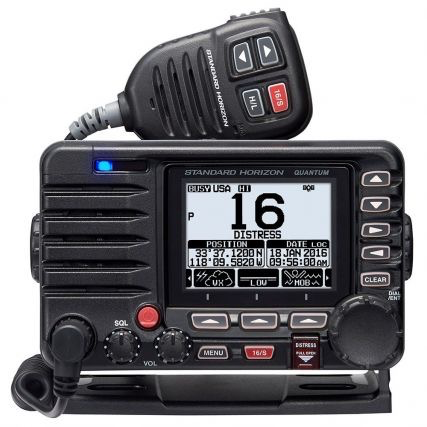 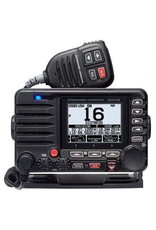 NMEA 2000
Plug and play NMEA 2000 interface. The integrated NMEA 2000 supports all PGN's for Navigation, GPS, AIS and DSC function. Simply plug the NMEA 2000 into your existing network to complement your system with full VHF and DSC features.
Wireless Second Station RAM4W capability
Wirelessly control all radio functions of the GX6000 with the interface of the RAM4W wireless Remote Access Microphone. Using the SCU-30 Wireless Access Point plugged into the back of the radio, you have the capability of syncing up to 4 RAM4W units. With an operating range of up to 65 feet, the RAM4W allows you to control all Radio functions including DSC Calling, Position Polling, Group Calling and more, or use the RAM4W to intercom between the main station or between other wireless RAM4W units.
Built In AIS Receiver
The Quantum GX6000 displays AIS target information (MMSI, Call Sign, Ship Name, BRG, DST, SOG and COG) on the large front panel display. Having this information allows you to contact an AIS Ship directly using DSC, shows your vessels position in relation to AIS targets and alerts you when an AIS ship may be approaching too close to your location via the Closest Point of Approach (CPA) Alarm.
Integrated 25W PA/Loud Hailer
The Quantum GX6000 includes a 25W Loud Hailer with Fog signals; Bells and Whistles with listen back. For added benefit, the last selected VHF channel can be heard when in the PA or Fog modes and the AIS Display may be accessed and used.

In addition, the Quantum GX6000 allows you to start a fog horn and then view the AIS page simultaneously.
Integrated Voice Scrambler
Loaded with an internal 32 code voice scrambler for private communications. the 32 code scrambler is compatible with all Standard Horizon 4 code scramblers already in use. Simply select a channel to be scrambled then select a common code between the transmitting and receiving radios and your communications are secure.

Add your review
0 stars based on 0 reviews
newarrival /